Also known as Alcatraz Citadel, this Fort was build on Alcatraz Island, located off the coast of California (San Francisco Bay). A natural defensive point, The Federal Government spent no time is building a military reservation there. Isolated, a massive “artillery battery” that encompassed the perimeter of the island was built (consisting of several hundred guns of various “heavy” calibers). Some 200 Federal soldiers were posted there for it's commissioning as an Army Post in 1850. Permanent structures for housing soldiers (barracks) and officer quarters were added. A lighthouse was also built to assist shipping.

At the outbreak of The American Civil War, Fort Alcatraz became an important facility for storage of munitions (with some 10,000 muskets and over 150,000 rounds of ammunition were stored there). Fear of Rebel attack was always present. A heavy Pro-Confederate presence was known in Los Angeles (farther south) as well as in San Francisco. As sympathizers were arrested, a place was needed to contain them. Alcatraz as a natural location – so the first military containment (prison) structures were built. A one point several hundred such sympathizers were incarcerated.

After the War, Alcatraz was used to contain captured Native Americans from the many Indian Wars that had started on Western Plains. Alcatraz continued to serve as a Military Prison well into World War I (holding German POWs). Considered too expensive to maintain by the US Army (due to the constant battering weather conditions of the Pacific winds), Fort Alcatraz was ceded over to The US Federal Prison System in 1934. The “Fort” was dropped in favor of simply “Alcatraz”.

The prison went down in history by the now notorious nickname - “The Rock”, and was considered one of the worst Prisons in America. ONLY the “worst of the worst” were incarcerated their (sent from other Federal Prisons). It would remain this way until it was closed in 1963. Alcatraz is a National Historic Site (which is also “certified” as one of the most haunted places in America). 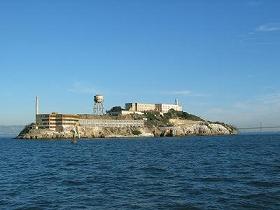