A series of legal restrictions that were placed on usery of the vast European forests, Forest Law was the central means by which Nobility maintained their rule. The Laws symbolized how the Nobles exploited their relationships with Peasants. The Law further established the privileges Nobles had to unlimited use of “protected” woodland for everything from woods, peat, and of course – wildlife. This meant, Peasants could not use forest's so protected. In the period after Rome fell, there was little to no control over hunting, wood and timber gathering or clearing land. By the late 7th Century, Forest Law was enacted. Initially starting with The Merovingians (France). The Laws were enacted to provide adequate stewardship against deforesting and eliminating wildlife through over hunting. However, with Peasants barely surviving, the loss of “free range” hunting – was a severe economic blow. The Laws came with The Normans when they invaded England in 1066.

A “special” Court was created called “The Forest Eyre”, who enforced (through Sheriffs), the law in forests and further metted out punishments accordingly. Although death was the “ultimate” punishment, normally a monetary fine was imposed. This had the effect of creating yet another source of in come for Royalty. In Germany, these “enforcers” were known as Baliff's. With the decline of The Feudal Era, both the power of The Nobility and the economic centrality of the forest (replaced by heavy imports) waned, as did The Law. 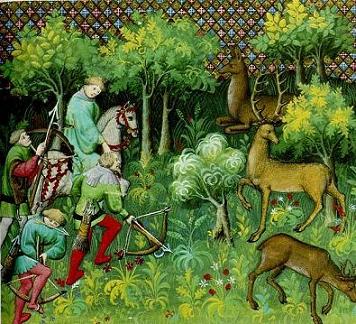