The term “Forecastle”, in relations to Seafaring terminology – describes that portion of a Sailing Vessel, which was “forward” of The Forward Mast. This was also (below Decks), where a Ships Sailors (Crew), lived. In The Middle Ages, when Fleets of Ships were constructed for Warfare, The Forecastle was an actual structure built, which emulated a Castle’s Turret Tower (or Battlement). These Devices were used to fire Arrows or throw Spears into an Enemy’s Ship.

The Forecastle was somewhat smaller to the much larger structure built towards the end of The Ship or Aft, called The Aftcastle (and served the same function). The basic theory was to create a similar defensive land Castle – except on The Sea. The designs of The Forecastle as a defensive Ship structure would end with the development of Artillery for Ships in the 16th Century. However, the name would remain as part of The Ship’s nomenclature thereafter, which it evolving into the term “Foredeck”. The shorted name of “Foc’sle” become the most well used evolutionary term used by Sailors. It is still used by tradition in some Navies even today. 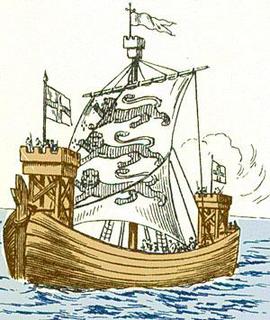