A common and very iconic symbol, The Fleur-de-Lys is seen throughout English and French Heraldry (among Royal and Nobleman, alike). The symbol has long come to denote French associations. Adopted by The Rulers of France (possibly as early as the 9th Century), It is described (depending on the Country, mind you) – as a Lily, Lance Head and symbol of The Trinity. In some Cadency, it symbolizes the 6th Son in Peerage. Always tinctured in gold or yellow, this symbol was a common Charge on English Monarchy Arms from the mid- 14 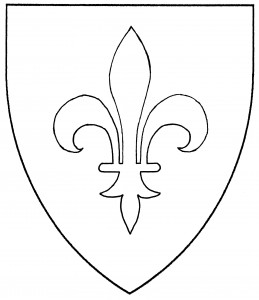