While it's use in Artillery was known in the 18th Century (Napoleonic Wars) – it was not until World War I, that the technique of ''Flash Spotting'' was perfected. The use of the method was born out of the Trench Warfare of the Conflict. The often great distances between Allied and Enemy Positions, coupled with concealed Batteries (and long range Pieces), gave the ability to fire back or use ''Counter Battery'' Techniques difficult. This dilemma lead to ''Flash Spotters''.

A Flash Spotter was a specially trained Soldier who was often placed in an Observation ''Hole'' or related concealed construct. At night time, He would observe with Field Glasses – the ''flash'' of Enemy Artillery in the night sky. Determining distance from ''Line of Sight'' method, coupled with multiple Enemy Batteries firing, would wiring Radio Communications. Using Map Quadrants, a rough ''Triangulation of Fire'' could be created. Using this primitive (but often workable) method, Allied Batteries could then counter fire.

Late in The War, a series of electrical ''Plotting Boards'' were used. As reports from multiple Spotters were ''phoned in'', bulbs were lit to show proper (or possible) – Enemy Artillery Positions. The Imperial German Army also experimented with the tactic – even using the dangerous procedure of Night ''Overflights'' to try and accurately locate Artillery. These methods were soon ceased with the loss of too many Aircraft of The Era. They too did deploy Spotters in Forward Observation Positions, and often used similar methods. Although in today's more technical age, the need to use ''Flash Spotters'' is unheard of. However, the tactic is still taught to American Artillerymen. 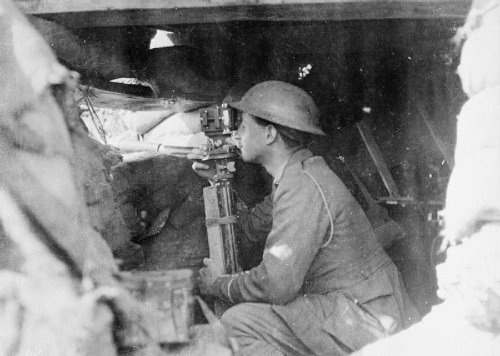