Designed by Germany in 1901, The Flamethrower was a chemical weapons device capable of deploying a flammable fluid to harass the enemy. Ideal for Trench Warfare (which was a great part of battle tactics in The War), The initial Flamethrower was a large 40-pound metal cylinder drum, filled with pressurized gas (in a lower compartment) – and a flammable oil (in the upper compartment). Operated by a lever, pressing such would release both substances into a rubberized tube. The resulting spray of liquid was “ignited” by a simple wick device (lit) – in the nozzle. German versions were so cumbersome, that 2-man crews were needed (1 to carry the heavy drum on his back while the other operated the nozzle). Capable of projecting a 20 yard stream of fire and smoke, the prototype weapons were designed for 1 shot only. Subsequent shot would require replacing the nozzle wick (each time). First used in 1915, the result deployment caused many British soldiers to run from their trenches (after which they were shot by German Infantry). Used in 300 known battles, it was effective. Of course, targeting by Allied soldiers (a single well placed rifle shot) – would stop activities as well. Great Britain attempted to experiment with Flamethrowers as well (with most of these being non-portable models). Time and technology would further Flamethrower use into a single man, portable unit (worn on the back). They would be extremely effective in the 1950s and 1960s. 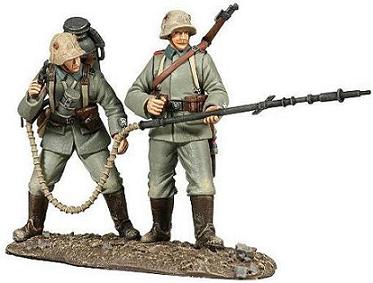