Flags of The Papal Navy

While one might not think of The Holy See in Rome as having or even needing a Naval Force, one in fact did exist (at different Periods). The need for Naval assets for protection of Papal property established a Navy in the 17th Century. The Ottoman Empire had made another ''rush'' into Europe and had fairly crushed The Byzantine Empire. It was The ''Eastern Empire'' that provided protection to The ''Western Empire'' (The Vatican).

The Pope in Rome purchased a small fleet of Warships of various types – and outfitted them with a Naval Force. In times of peace, no more that (2) such Vessels were kept, mostly to serve as Papal transport (if needed). With the rise of Napoleon (who was supported by The Pope), Imperial France supplied roughly (12) Warships to The Papal Navy. Most of these were lost in battle. The Papal Navy would continue to exist (and serve) until the 1870s – when Pope Pius IX sold off the last Warship.

The first known Ensign of The Papal Navy was described as being a Red Field in entirety. Centered, was a colored Crucifix, to which was flanked on the Left side by colored image of St, Peter – and the Right by St. Paul. This Flag was first recorded in 1669.

The second known flag featured a White Field without a Crucifix. Replaced with a Papal Tiara (Mitre Crown), this was still flanked by the two images of The Saints. This Flag was seen in used from the 1820s until the 1870s. 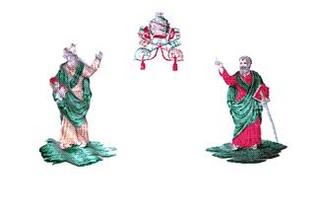