Flags of The Belgian Legion

As previously discussed, The Belgian Legion was a Military Group created from Belgian Volunteers (and others), who were dispatched to the several French Colonial Wars in Mexico (1860s). The Legion was station in Mexico in 1865 (lasting for a year before they were recalled). The Legion used several Flag types used by it's Infantry, Cavalry and Artillery components. The first most commonly used by it's Infantry was based on The French Fanion (a small Guido-type flag placed into the barrel of a Rifle). The Belgian Fanion was based on both The Mexican Imperial and Beligan National Colors. The Field of The Fanion featured a Tri-Color in The Mexican colors of Green, White and Red. In the Upper Left Canton, was featured The Belgian Tri-Color of Black, Yellow and Red.

The Legion's Standard was somewhat more elaborate. Still using the motif of their Fanion, The Legion included (4) Golden Imperial Mexican Eagles (the symbol of Mexican Imperial Authority). Each Eagles was placed in a quadrant of the upper corner of The Flag. Centered inside the White Stripe was The Belgium Royal Seal (a Gold Crest flanked by Black Imperial Eagles). The wording ''Belgian Volunteers'' was placed above and below The Crest. 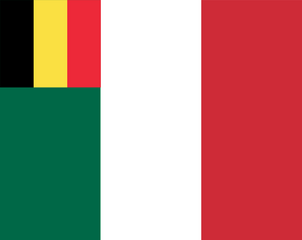