As we have seen with the torture (and some cases, execution) method known as Flagellation, this was the practice of using a whip iron related device - to beat a victim (normally on their back). Common and quite Ancient in "application", all Cultures throughout The World used it (with some still using the form for Corporal Punishment). In terms of Ancient Rome, the method was used quite extensively - within a series of established "guidelines".

Roman Citizens were afforded  great leyway regarding what kind of punishment they could receive and how it was meted out. As we have seen, Romans could not be Crucified or punished in any way used on Slaves or non-Roman Citizens. This was true of beatings. This style of punishment was strictly reserved for Slaves. Exception to this rule was normally Treason or Sedition to commit same. In this Conviction, a Roman Citizen could be beaten (having forfeited his or her Citizenship). However, by the Imperial Era, it's use on soldiers began to develop, as both punishment and "motivator". The use of this punishment was seen used in great frequency within The Auxillia.

A specially designed whip called The Flagrum, was used. Much shorter than those devices used for Public punishments and execution, they were made of wood and about 1-foot long. At the end of the handle was a series of extensions, or strains of knotted rope (leather is a Historical inaccuracy). The knotted components were spaced about 3-inches in division, on each rope. The accused or person to be punished may be striped to the waist or simply allowed to wear his Tunica. The amount if strikes depended on the type of violation. It took great skill to use The Flagrum (as breaking the skin or causing lacerations, were "frowned" upon). 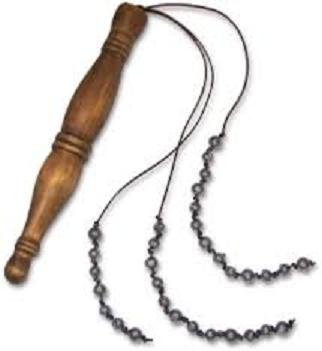