Flag of The ''Yorkshire Blues''

The Military Militia of Volunteers known as The ''Yorkshire Blues'' were supporters of England's King George II, during the Jacobite Wars of 1745. Raised in York, England – they based their Regimental Colors on both their Support of The King against the ''Pretender'' Prince Charles Stuart (''Bonnie'' Prince Charlie). The Blue Field was representative of most Loyalist Supporters as well as The Royal Army, who used Blue Facings against the traditional Crimson of their Uniforms. The Centered White Shield with Red ''George Cross'' was the City Crest of York (of which The Regiment was raise). (5) Gold Lions were related to Royal Support.

The phrasing or uubannered writing on The Field place the word ''Religion'' over the top of The Crest (Center), with an off set phrase of ''And'', to the right of The Crest. Below all, was the final phrasing of ''Liberty''. The wording was an attack on the proposed ''forced'' religion institution of Catholicism which would have been installed on England had Prince Charles and his Forces (The Jacobites) – won their claim thru battle. The Banner of The Yorkshire Blues was present at the epic Battle of Culloden (Scotland) in 1746. 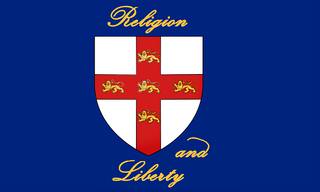