Flag of The Virginia Safety Committee

The Safety Committee of Virginia was formed in 1775 by Colonial Legislative Members. The Committee felt, after several years of mistreatment by Great Britain – without redress, could only be met by severing all tie with that Country, and forming an independent Nation. The Committee first met in Hanovertown, Virginia. With their Resolution for Independence passed, similar such Committee's would met and form, all of which would come together as one, forming The United States of America on 1776.

The Committee identified itself by a Standard Field of Light Blue. Imprinted on both sides of The Flag was the wording ''Virginia'' and ''For Constitutional Liberty''. Similar Flags were made and presented to some of the first State Militias that formed. 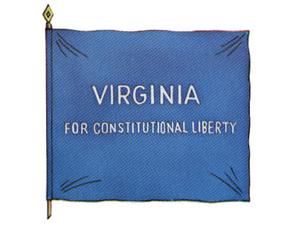