Flag of The United Irishmen

Used during The English Rebellion of 1798, The United Irishmen Flag was one of several previously discussed Battle Flags used. The United Irishmen Flag was used at The Battle of Arklow. Their goal was to capture Dublin, Ireland and free it from British control. They would ultimately fail. Their Flag was a Field of Emerald Green. A large White Christian Cross was placed in the Center – over which was placed the word “Liberty” (in White), with the additional wording of “Or Death’’ – also in White. 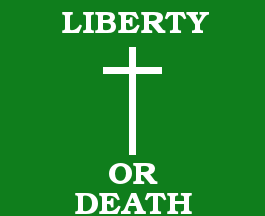