Flag of The Seaforth Highlanders

Officially known as The Duke of Albany’s Own Seaforth Highlanders (Ross-shire Buffs), They were among the first Highland Regiments deployed to Egypt during The Sudanese Wars of the 1880s. They were also among the first to deploy with “Khaki” Tan Uniforms, in lieu of the traditional Scarlet Coat. The Seaforth Highlanders fought with distinction during The Boar Wars, World War I and World War II. The Regiments Flag reflected their Scottish heritage and traditions. The entirety of The Field of the Flag was Blue in color. A White Cross was placed on the Field, crossing the Field and touched all 4 Quadrants. This design was the original Flag of Scotland (The Cross of St. Andrew) which was incorporated into The British Union Jack. Centered was a Stag Head, in White -trimmed in Gold. Above this was the Signet of The Duke of Albany. Finally, placed above this, was a Royal Coronet. This showed their loyalty to The Crown.  Underneath The Stag Head image, was a Banner with the phrase “Cuidich ‘n Righ” (“Aid The King). The Seaforth Highland Regiment was active from 1881 to 1961. 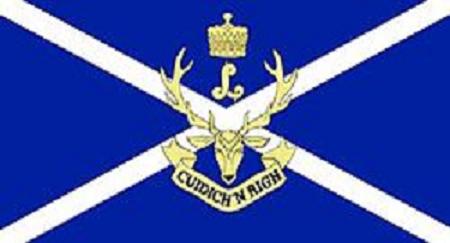