Flag of The Republic of Lower California

Also known as The Republic of Baja, California – The Republic of Lower California was a short lived (1853-1854) political entity, founded by American Mercenary William Walker. He and a ''rag tag'' Army of 200 soldiers took the area of Baja and declared it a ''Republic''. While most of California had been taken by The United States via their victory in The Mexican War of the late 1840s, much of Lower California was still in Mexican Control (administratively). The local Mexican populace and remaining Mexican Army resisted this new Republic and fighting was constant. Many US Army deserters flocked to Walker (who paid them well).

The Mexican Government complained to a disinterested US Government. Nonetheless (perhaps seeing an eventual claim on Lower California), The US Navy was sent to chase out Walker and his Republic (1854). The rest of Lower California would be eventually given up by Mexico resulting in the current geography of California. The Republic's short lived Flag featured (3) horizontal Stripes of (2) Large Red bisected by an Orange one. A Canton of White was placed off centered from The Hoist. Inside this, was a single Blue, 5-pointed Star. 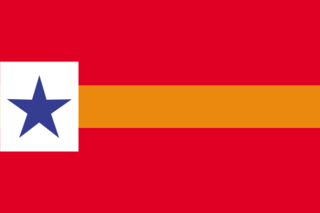