Flag of The Pathet Laos

The Pathet Laos were a Political, Socialist/Communist Force which traced it's origins to 1955. They were against both Royal Laotian Rule and French Colonial ambitions in The Country of Laos. Wishing an autonomous Communist Government, they supported North Viet Minh Leader Ho Chi Minh. After The French were forced to withdraw from Southeast Asia, The Pathet Lao sought to remove Royal Rule, put were fought back into The North and East of The Country. A Civil War would remain between the two faction until 1975 (when, supported by a victorious North Vietnamese Government, were able to oust The Royal Laotian Monarchy). The Pathet Laos were major supporters of The NVA and VC Forces during The Vietnam War. In addition to Military supplies and aid, several Sapper Battalions were allowed to stage operations against US and Allied Forces from Laos.

Their Flag was a series of (3) Horizontal Stripes for the Field of The Flag. These colors were Red, Blue and Red. Centered upon The Central Blue Stripe, was a Large White Circle. 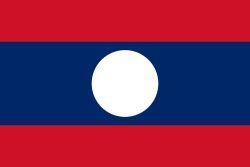