Flag of The Morgan Rifles

Formed in 1775 (in Virginia), Morgan's Rifles were an elite Corps. (of Riflemen) and reportedly crack shots. Commanded by Frontiersman Daniel Boone's Cousin (Daniel Morgan), they were used in the “ungentlemanly” (for The British) task of “sniping at” British Officers and Non-Commissioned Officers (with great effect). It was said The Morgan Rifles participation at The Battle of Cowpens (1781), was a turning point for The Patriots. Their Colors were a Tan Field. In the Upper portion of the Flag (center), was a Wreath with the numbers “1775” (the year they were raised). A series of White Bannerolls were placed (intertwined) in the center) with “Morgan's Rifle Corps.” 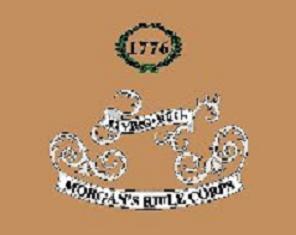