This Mexican Army Unit was created in 1823. Stationed at Chapultepec Castle, their garrison was 300 men strong. They were the principle defenders of the Castle against the 3,200 man strong American assault troops who attacked the Fortress during The Mexican-American War. After the 2-day assault, only 10 survived. The Fortress fell to the American Army (under command of future US President Zachary Taylor). The Unit used the National Colors of Mexico – which consisted of 3 bars (green, white and red). In the center was The Imperial Eagle (a standard in the National Colors to this day). The Units name was stitched in black under the Eagle. Captured by American Forces, it was eventually returned to Mexico in the 1920s. 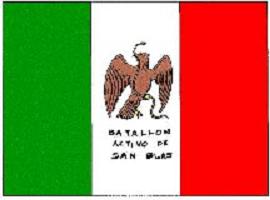