Flag of The Irish Republican Brotherhood

The Irish Republican Brotherhood, was a secretive, Paramilitary Irish Organization, first formed in Ireland in 1858. Related to The Irish Rebel ''Fenian'' Group, The IRB fostered independence from Great Britain and a Republican form of Government established in Ireland. Unlike most Irish Political Organizations of The Era, The IRB was staunchly Protestant and were against any form of association with The Catholic Church. Formed into para-military trained Militias, The IRB was responsible for various reprisal attacks against British Military Formations stationed in Southern Ireland, and were early proponents of ''Irish Physical Force Republicanism''. Lasting until 1915, The IRB would be merged into The Irish Citizen Army – which participated in The Great Easter Rising of 1916. After that disaster and ultimate failure to oust British Forces from Ireland, The IRB disbanded in 1924. Their Banner, was a Green Field in it's entirety. Centered, was a Golden Half Sunburst, representing a ''New Dawning'' for Irish History. Their slogan was ''Ireland Forever''. 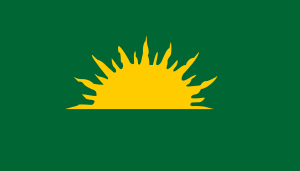