Flag of The Holy Roman Empire

The “Official” Flag of The Holy Roman Empire is first thought to have been raised around the 14th Century (and may have been used by Henry I). Considered a Banner of Imperial Authority (and not a flag), it was flown by The Emperor and over Imperial Nations (often in conjunction with a National Flag – if one was used). Traditionally featuring a yellow field, the entirety of the field was filled with a black double-headed Eagle (another symbol of Imperial Power). The Eagle heads also featured twin halos (symbolizing God's Authority – given to The Emperor). The yellow is typically a religious color used to denote Catholicism. This banner was used into the early 19[sup]th[/sup] Century. Various design additions were implemented by successive Emperors through it's history. This Banner was not supposed to be use in actual Combat actions. By 1806, The Imperial Banner had ceased to be used (with the final Emperor and the dissolution of The Empire). The design was incorporated into many other flags (such as Austria) and is still seen represented in some form today. 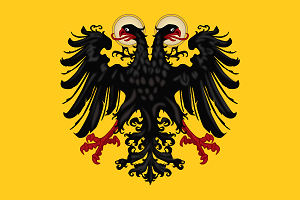