By 1804, Emperor Francis II of The Hapsburg Dynasty (Austria), "claimed" Title of the "Ancient Rule" of The Holy Roman Empire. The Emperor established a Standard based on both The Austrian National Flag and elements of The Holy Roman Empire of 300 years past. The entirety of his Standard comprised of 11-multi-colored Stripes. These were 4 Blue, 4 Gold and 3 White. Centered on The Flag, was the traditional Double-Headed Black Eagle. Surmounting this was imagery relating to The Hapsburg Dynasty. Replaced in 1806, The Flag was incorporated into The Austro-Hungarian Empire until 1918. 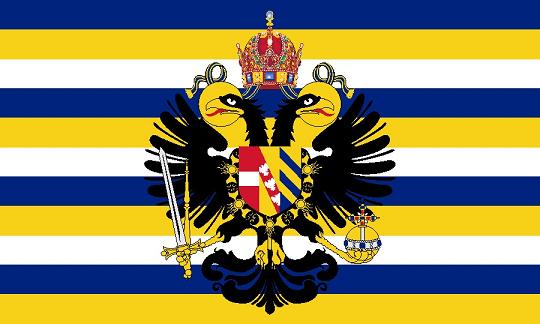