Created from Swedish Military prisoners taken at The Battle of Fleurus (1690), during The Seven Years War, they would eventually acquire the identifier of ''Royal'' in The French Army. Later, only Swiss Officers commanded, with German NCOs filling the ranks. Soon many Nationalities would staff it's line, making it an impromtu ''Foreign Legion''.

The Regiment was also one of the few allowed to use Dark Blue with Buff facings for their Uniform (at a time when the totality of The French Army used only White). Their Standard was a White George Cross with The French Royal Seal. The Upper Left and Lower Right Canton bore a Blue Field with The French Fleur with the Upper Right and Lower Left Cantons bearing The Swedish Lion on a White and Blue striped Field.

The Regiment was made Bodyguard to French Queen Marie Antoinette in 1783 and performed Palace duties as Her Guard. After The French Revolution, all ''foreign'' Units were disbanded, including The Royal Swedes. It was reformed by Napoleon in 1814, and fought at Lepzig and in Norway. It was again disbanded in 1815 following Waterloo. Today, The 4th French Army is the direct linage of The Royal Swedes. 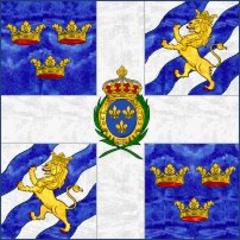