Flag of The European Federalist Union

Attributed to British origins in 1948, The European Federalist Flag developed at the end of World War II. Many Countries, shattered by War – were split along the political lines of either a Europe, formed as a loose Union or a Federalist based ''United States of Europe''. The Flag of the supporters of a Federalist Europe first flew this Flag at The Hague Congress of 1948. The Flag was a White Field which bore a large Green Letter ''E'' (elongated from the Hoist to Fly). This icon took up the majority of The Field. The Federalist Flag (also known as The ''E-Flag''), was adopted by some Peace Parties as a counter to the rise of Soviet Communist in the 1950s. Rarely seen today, The Federalist Flag is considered in the linage of today's Flag of The European Union. 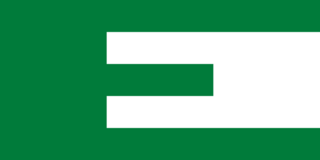