Flag of The ''Black Legion''

Hungarian King Matthias Corvinus founded what many consider the first Standing and paid Army in Europe. Named "The Black Army" (aka "The Black Legion"), it wad composed of Infantry, Cavalry and early Artillery. They existed as a Fighting Force from from 1458 to 1494. They would serve as the dominate protective Force in The Region against The Ottoman Incursions. At their height, The Black Army stood at 28,000. The standard Colors used by all components of The Legion was of a "Shallow-Tail" design. Using a Heraldic Countercharge style (reverse coloring), the Upper portion of the Flag was White and Red (Corvinus' Personal colors). An equal placement of 5 White and 5 Red Stripes (closer to The Hoist of the Flag), was representative of The Corvinus Dynasty or "House"). The "Griffin" (closer to The Fly of the Flag), was representative of Corvinus' Crest. As stated, as. Countercharge design the Upper imaging was reproduced in their entirety,  only "reversed" in color variant. Centered, was a smaller Blue Shield which bore the image of a Ravens  ( The Legion's Mascot and identifier). 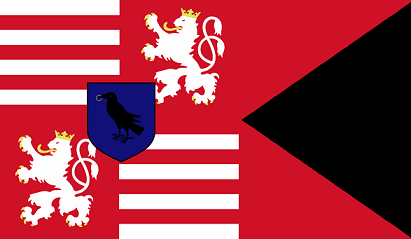