Flag of The 1st Westmoreland Volunteers

Known as “The Rattlesnake Flag”, The 1st Westmoreland County Volunteers were raised in Pennsylvania in 1775. They occupied the unusual role of only “serving” in The Continental Army of George Washington for a few months. As they were raised in the farthest portion of The (then) Colonies (Western Pennsylvania) – and their familiarity with the Region, they were detailed back to their Colony to fight (and protect) it from “Allied” Native Americans to The British. The Unit was also distinguished as being one of the few that did NOT wear the uniform of The Continental Line (only it's Officers did). Their Colors were based on the British Naval “Red Ensign” (a Red Field with a White upper Canton featuring The Cross of St. George). In the Center was a coiled Rattlesnake with the Banneroll of “Don't Tread On Me”. It is thought that although they agreed with the intolerable way Great Britain had handled The Colonies, “action for their rights” was necessary – but many still retained their “sympathies” towards England (as considered themselves still Subjects). This was shown by their retention of “British Colors”. 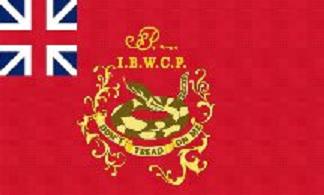