A Jamaican Pirate of English birth, Nicholas Brown was active in the early 18th Century. Originally commissioned as a Privateer by England against Spain, after hostilities ended – He went back to His vocation. So effective, The Governor of Jamaica sent word to England for Warships specifically to hunt down Brown. He had a skill in evading capture (often thru deception). However, He was attacked by a former Pirate turned Hunter in 1726. Fatally wounded in the engagement, The Hunter had Brown's head removed and pickled in a jar of Rum (so He could cash in on the reward on Brown). Brown's Colors were a Black Field onto which was placed a Skull at the top most portion (Center). Under this was a stylized Human Heart. This was pierced by twin Swords, ''dripping'' blood. Under this was placed an Hour Glass. It's ''Piratical'' meaning.....''Your Time is Short Should You Not Yield To Me!'' 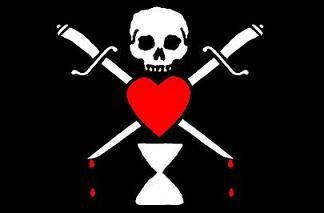