As we have seen, Captain Edward Teach, aka ''Blackbeard'', was one of the most memorable and infamous of all 17th Century AD Pirates. As vicious as they come, Blackbeard would serve as the template for those that followed His vocation, as well as the atypical portrayal of what a ''Modern'' Pirate is identified as. Preying mostly off The Coast of Carolina (US), with a few forays into The Caribbean, Blackbeard operated with both a small Fleet and a single ''command'' Ship. As with most Pirates, He designed and flew His own Flag to identify His presence to His potential victims. Blackbeard was not known to used the often overused ''Jolly Roger'' (Skull and Crossbones) Flag. Blackbeard's Flag was documented to have been of a Black Field in it's entirety. The image of Devil wa placed near The Left Canton (Hoist). The ''Devil'' (with upraised Cup), is ''stabbing'' with a Spear – a stylized Human Heart, which in turn is ''bleeding''. In Pirate symbolism, this means ''To Court Me, Is To Court The Devil and will end With a violent Death''. 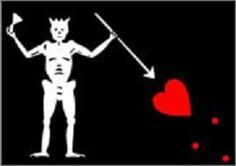