The Flag of East Germany was created with the division of The German Nation after World War II. Western Germany was administered by Treaty to America and England, with Eastern Germany being administered by Soviet (Communist) Russia/ Adopted in 1946, The Flag was based on the traditional German National Colors of pre-World War I and The Weimar Republic. This was (3) horizontal Stripes of Black, Red and Gold. Centered, was an imaged in Gold, depicting Communist ideology – a Hammer and Tangent. With the fall of Communist in East Germany (1990), Eastern Germany merged back with West Germany into one Nation with the current National Flag of Germany being adopted and used. 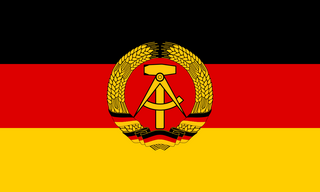