Well known English Pirate Daniel Johnson terrorized The Caribbean in the 17th Century, earning Him the name ''Johnson The Terror'' from The Spanish. In addition to His ''takes'' on the ''High Seas'', Johnson attacked Coastal Towns often and was quite prolific. His ''Fleet'' was well feared (and avoided). As a Captain of such a Fleet, Johnson designed His own set of Colors to be flown. Utilizing the ''traditional'' Skull and Crossbones or ''Jolly Roger'' (a White Skull over a pair of Femur Bones), The Skull had the unmistakable ''mark'' of a bullet hole in it. In ''Pirate symbolism''', this meant ''To Resist Me, is Death''. 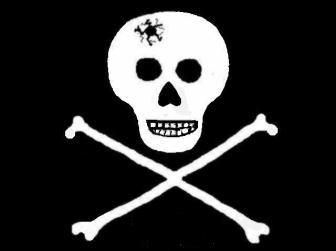