Fire was a very common symbol used in many Countries for their Heraldry. It was most often associated with “Zeal”. This could be in how one carried out their duties to The Crown or had distinguished themselves in battle or diplomacy. An early image (10th Century), “Fire” was also adopted in many Religious Heraldry or Icons (in much the same fashion). Coloring was standard in use in most Countries and Kingdoms, with bright Red or Yellow-Orange flames. “Fire” could be placed alone on a Crest or incorporated with other images. 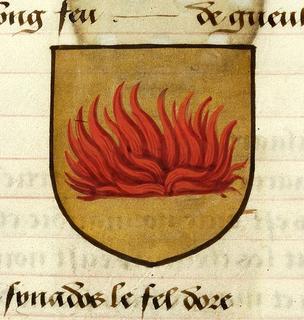