More closely associated with Ancient Greece, The Fillet was adopted by Ancient Rome as a way of keeping hair out of the face of The Wearer. Although typically, Roman Men did not wear their hair “long”, Women did – to varying degrees of length. Fillets were more common with young Girls. They were used by both Common and Wealthy Classes of Women. Due to The Fillet being non-elastic, they were sewn to fit one’s head. Often made of simple Linen, more expensive Fillets made of Silk and other fine fabrics were worn.

Colors were from plain to vibrant and Fillets could be richly embellished. Although a “feminine” component, leather Fillets were used by Roman Soldiers and Gladiators to absorb sweat. In the Male Form, Fillets were able to be joined at the end of and tied by leather straps (fastened at the back). The Fillet would continue in History – in variations, used as a working garment and by Nobility of various Cultures and Societies. 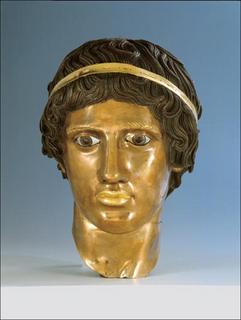