Probably no one image of a Ship is more recognized than that of The Figurehead. These three dimensional representations were seen mostly from the 16th thru early 20th Century. In reality however, Figureheads evolved from much older forms, thousands of years old. As early as Ancient Greece, the painting of images on The Prow (Bow) of a Vessel was commonplace, especially among Warships. Eyes, Teeth and Faces were used to convey both favor from The Gods and as an early form of psychological warfare. Later, full sized representations (statues) were created and placed on The Foredeck. These versions of early Figureheads were often made to resemble a specific Deity.

By the time that Ancient Rome established it’s Navy, the use of more traditional Figureheads developed. Made of carved wood, these figures (again of a specific Deity), were half figures (head to waist). They were installed underneath The Prow (or Front) of The Ship. The development of full sized (5 to 6-foot in length) Figure began around the 17th Century with most Nations. They were seen as “good luck”. No longer depicting a God or Goddess, Christian Saints or Royalty were often depicted. Another popular style was the use of fanciful or mythical animals. Although tradition dictated that the presence of a Woman on a Ship was considered “bad luck”, many Figureheads were female. Most of these Figureheads were intricately carved and realistically painted.

With the advent of Steam and the disuse of traditional Sail for propulsion, most Figureheads were modified. Most National Navies (Germany, France and The United States by way of example), began to use Animal imagery in the form of Eagles or Hawks. These were placed on plaques and placed on the far most Foredeck. Later, many of these were replaced by Heraldry Plaques depicting a specific Home Port, Town or Royal Commissioning. Although many Figureheads were lost when Ships were broken up after decommissioning, some were saved. Most are considered Art of the bygone Age of Sail. 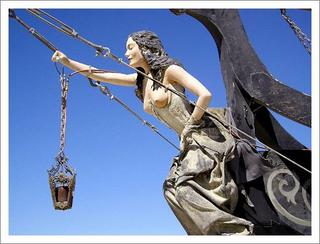