The use of The Fibula was a very common and accepted practice in Ancient Rome. In fact, it’s use was seen as a “Status” symbol, The Fibula was common among The Wealthier Class in Roman Society. Used as a closure for Cloaks and Robes, they spanned from very plain to very elaborate. Many different materials were used in the construction of The Fibula. Gold and Silver were the most common metals used. Intricate etchings and often engraved mottos were very common. Only the most Wealthy had precious stones and jewels set into The Fibula.

The clasp of The Fibula was not torsion based (spring), but a simple needle/pin attachment. They would be used to clinch close the upper portion of the front of a Clock or Robe. Fibula were often given as gifts or tokens by wealthy benefactors. Fibulas were often “passed down” as heirloom pieces – especially if they were bestowed by a high-ranking Senator or Emperor. Fibulas were also emulated by The Common Class. These were often made of wood or cheaper metal construction. Often they were not decorated. The Fibula would evolve into the common Brooch and would become a true hold over in Fashion from Rome’s demise, becoming a status symbol in The Dark and Middle Ages. 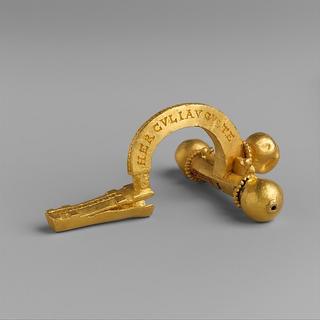