The French term ''Federe'' (which translates to ''Federates'' or ''Federals''), was a Military Formation related to many similar types of Militias, found in many World Nations. Originally, The Federes were akin to a Royal National Guard, or augmentation to The Royal French Army. They were conscription soldiers, to include Non-Commissioned Officer (with the notable exception of The Officer Ranks).The first Formation was in 1790. Their numbers ranged from 2,500 to 4,000 of all Ranks. By the time of The First French Empire, The Federes were reformed into what would form the base of Napoleon's ''Grand Armee''. Reserve components were still stationed within France, serving as a National protective Force, thru much of the later Napoleonic Wars. 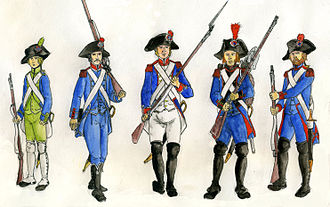