The Faule Mette was a ''Supergun'' designed and deployed by The German City of Brunswick, around 1411 AD. Although a Bombard weapon, The Faule Mette is still classed as a Siege Gun. It's massive size made it difficult to both move and fire. The Faule Mette was only fired (12) times. Cast of solid bronze, The Faule Mette barrel weighed 9-tons. It was claimed that The Supergun could fire conical stone balls weighing from 300 to 900-pounds. In an 1787 test, a Shell purportedly was measured at striking some 8,000-yards. It may have taken a Crew of 15 Men to operate The Faule Mette. It was a staple fixture of sightseeing in Brunswick for centuries. It's fate is somewhat a mystery as it disappeared in the mid-19th Century (possibly smelted down). Only period illustrations of The Faule Mette exist today. 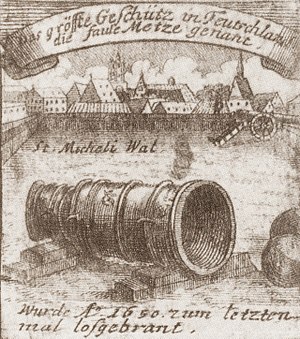