The Fauchard was a European Pole Arm related to The Halberd and Glaive Family of weapons. They developed around the 11th Century and continued into the 17th Century. Although the origin of the weapons name is from France, The Fauchard may have been inspired by The Russian Sonvya Spear. The Pole Arm itself ranged from 8 to 12-feet in length and was made of wood. The Steel or iron worked Head was of flat design and had varying length and width. The primary design similarities with all Fauchard weapons was the distinctive split or double blade (with was common.

The Fauchard design gave the User multiple edges with which to cut or strike with. Various versions were also effective in use by ground troops to ''pull down'' a mounted warrior. Although not as robust, The Fauchard was an early relative of The Bill Pole Arm. Much later in it's use, due to advances in bladed weapons – most Fauchard designed Pole Arms became less used on the battlefield and more seen as ceremonial weapons or for Palace Guards. Many were worked to be highly embellished (engraved) or likewise decorated. Although a ''striking and slashing'' weapon, some were also used as a type of short distance throwing device. This practice was not always as effective as a traditional Spear. 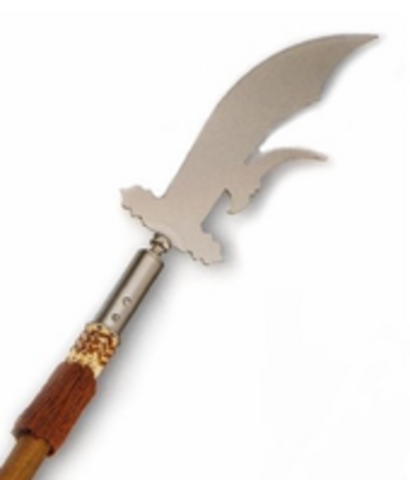