This banner is of French origin, seen around the late 18th and early 19th Century. Similar in use as the American Guidon and the British Company Color. The Fanion was a cloth miniature flag, often used to denote a Unit in the field. Although sizing was different (for Infantry, Cavalry and Artillery), on average they were 25-inches by 25-inches. The were mounted onto a thin metal pole. The Fanion “Bearer” would place the pole into his musket/rifle barrel. Their use would continue until the late 19th Century for some French field Units. 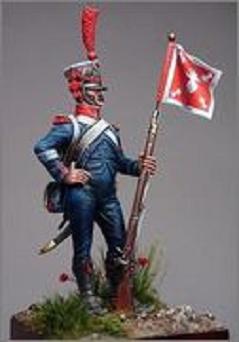