A Parliamentarian Regiment raised by Sir Thomas Fairfax in 1645, to serve in The English Civil War. The Infantry Regiment served in a record number of (16) Battles during The War. They also participated in Cromwell's Invasion of Scotland (to root out Royalist Supports to Charles I). Oliver Cromwell was said to have commanded The Regiment for several months. In 1652, Elements of Fairfax's Regiments formed the first Commonwealth Marine Force (briefly) during The Anglo-Dutch War. They were disbanded in 1660. The Regiment's Colors were Squared Shaped (as most English Civil War Banners were), had a Green Field in it's entirety. The Upper Left Canton featured a White Field with a Red Cross of St. George placed over. 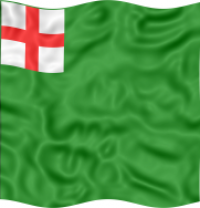