A Legal Term, ''Eyre'' was a 12th Century AD Medieval English Judiciary function, by which chosen Judges traveled throughout a Region or Kingdom, for the purpose of hearing Cases. Representing a King or Queen, their decisions were seen as the same as if a reigning Monarch had ruled. The Eyre was one of the earliest examples of what would much later be known as a Circuit Court. Much as in The United states in the 19th Century, regarding it's Territories – many jurisdictions did not have sitting or permanent Judges. An Offender or pending Case had to wait for a ''traveling Judge'' to arrive and hear such cases. This is the concept which evolved from The Medieval System.

Established as a means of ''policing'' once errant Nobles after The Baron's Rebellion under England's Prince John, the Eyre ensured that proper taxing and collection of said payments were made (under the terms of the Treaty between The Prince and His Nobles). Although seen as forthright and upstanding, no doubt some Eyre Courts were corrupt and were compromised by Lords bribing some Officials. 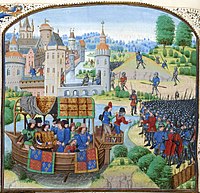