Seen as a precursor to Grape and Canister Shot, Explosive Shot (sometimes known as Hollow Shot) – was seen in development around the 16th Century. Constructed in the same manner as Solid Round Shot, the difference was that the projectile was hollowed out. Filled with gunpowder, the shell was primed with a secondary ignition system. Upon firing, the shell would travel to it's desired target and explode (sending the bits and pieces of fragmented shot in various directions). The Explosive Shell was very effective and remained in inventory in many Armies and Navies until the late 19th Century, when more effective and better constructed fragmentation projectiles were invented. 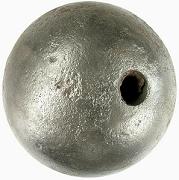