Although it’s exact origins is unknown, The Executive Curl was once known as The “Elliot Eye”. Named for British Army Officer Captain George Elliot, legend states that he was wounded in the arm during Battle in The Crimean War. Elliot pulled the Gold Braid from his Uniform and used it as an impromptu Sling. Other cite William Elliot, who was a Member of The British Admiralty. He created the “Knot” out of Braid to be worn by other Admiralty Members to set their uniforms apart from other Naval Officers. More Precisely, British Naval Regulations set forth in 1795 describe using such Cuff Braid to promote a difference in Naval and Army Uniforms. Soon other Navies began to adopt their own set Braiding for use by their Navies. These Braids are worsted Gold in Color and completely encircle the Cuff of the Uniform Sleeve. The last or Upper Braiding features the Curl – which is always placed facing outwards. By the 20th Century, the term “Executive Curl” developed and was made available for all British Naval Officers as part of their Service and Formal Dress Uniforms. The US, German, Russian and French Navies do not use Curl Braiding. 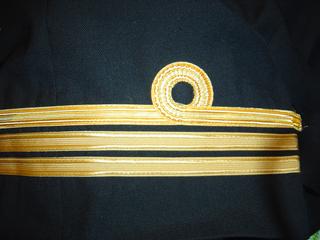