Perhaps the first weapon devised by Man (outside of the throwing of a rock), was the Spear. Although it's shape and embellishments have changed and evolved throughout the centuries, it's basic principle endures. A  long wooden shaft, it's end - simply sharpened to a point. More elegantly, tipped with a steel tip (made of numerous compositions).

The Spear was the most used and identifiable weapon known. In the Middle Ages, no self-respecting army would be fielded with Spearmen. Of note, and thanks to Hollywood, our perceptions of Vikings (Norsemen) - charging in some raid on some English coast was more often done with spears rather than axes and swords. Ideally, spears were designed as melee weapons or to be simply thrown. The Franks experimented with the winged or flanged tip spearhead. This too would become popular with the Vikings (again). While no true archaeological examples survived of wooden shafts, an average spear shaft was between 6 and 8 feet long.

An example of 15 to 25 foot shafts are given from The Battle of Falkirk (1298). Scottish revolutionary William Wallace used a phalanx of long spears as a "shield wall" against a heavy cavalry charge. As the Middle Ages moved forward, the need to throw Spears ceased. This was mostly in part to the invention of the Longbow and related ranged weapons. The spear in some part will begin to evolve into the various and well known Pole Arm class of weaponry. 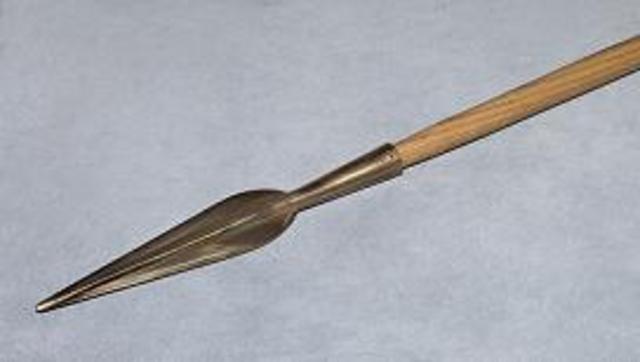