The top weapon of the Middle Ages, the Longbow was a staple in any Medieval army. Although "bow and arrow" warfare many centuries old, the technological advances in the Middle Ages (especially with the English version), made it a formidable weapon in an archers hands. Generally a bows length was considered adequate at 3.9 to 6 feet. An average "pull" (or draw force)was measured at 90 to 110 pounds (although some examples have been measured at 185 pounds!). The most favored wood (for strength) - was yew, ash or elm. No doubt more "exotic" woods were used when commissioned by nobility.

The woods strength was a key component to the Longbow. Proper "drying" of the wood could take 1 to 2 years. Shaping of the bowstave was an art form in itself. Although most bowmakers used the same techniques, many Shops had there own "secrets and styles".

Bow strings were made from flax, silk or hemp. The Longbow's arrows were made with the same care. Made from hazel, ash or beech woods, they were around 24 to 30 inches in length. Arrowheads were constructed from steel and iron and the Bodkin or Barbed version were the norm for use. Range of the arrow had been debated and disputed for years. On average, the maximum effective range was around 400 yards - with a minimum effective range of 250 yards. An "average archer carried 60 to 70 arrows and could fire 2 placed shots per minute. It took great strength to maintain this rate under extreme battlefield conditions. 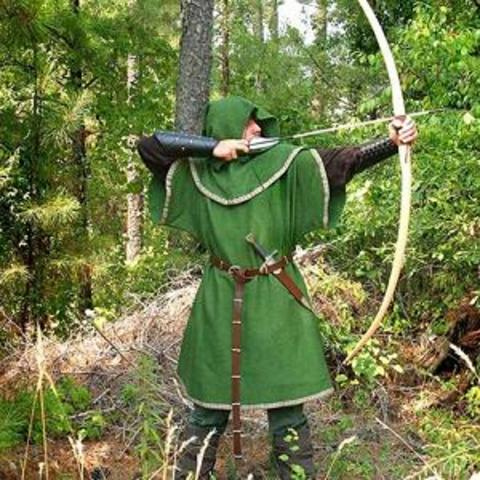