The late 14th/15th Century sword weapon was a variation of the Longsword. It was an example of an "anti-armor" weapon designed for attacks against various forms of plate armor (especially chain mail). Blade length could start at "short" (36 inches) or a surprising "long" (62 inches). Their overall weight could be 2 to 6 pounds. They could be used as one or two-handed weapons. These weapons are also an example of "special order weapons", not massed produced.

The blade has no cutting edge. The blade cross-sectioning was triangle or hexagonal (instead of straight). As such, the blade (when thrust), could puncture armor or mail quite effectively. The Estoc (French for Thrust) or The Tuck (English), is often considered the true ancestor to the Rapier of Renaissance Era. 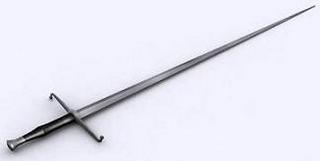