A ''Justice of The Peace'' is a form of (although seldom seen today) Lower Court Official, used in Territories or in States with very small populations located many miles from for formal settings. It was a common legal procedure to be arrested by a Sheriff or Constable and be ''brought before'' such a Judge. The position required one to be sworn in by a Mayor or similar City Official. In many cases, legal experience or training was not required. Ms. Esther Hobart Morris had none. Her claim to fame as Justice of The Peace, was that She was the very first Woman in America to hold such a Post.

Coming from humble beginnings, Morris was born in Upstate New York in 1812. Coming from a large Family, with the death of Her Mother when She was 14, Morris would eventually marry a Railway Engineer in 1841. Having several Children together, Morris would follow Her Husband to The West and the rest of Americans looking to ''strike it rich'' in Gold and Silver discoveries in the late 1860s.

She would end up in South Pass City, Wyoming Territory in 1871. A ''rumble, tumble Town'' Morris and Her Husband settled in. Her Husband would die of fever, leaving a struggling Morris with Family. She was known as a ''hard working and very honest'' person. Her determination was what attracted the attention of Town Fathers who approached Her to be Town Justice. The State itself was undergoing the throes of The Women Suffrage Movement, as with most in The Country then – determining the right of Women to vote generally, and be seen as ''equals'' with regards to work and pay. The former Justice was not a supporter, and when a more liberal City Council outwardly defended Suffrage, He quit. Morris was seen just as much a good replacement as a political example of ''how'' a Woman could be just as effective in such a position.

The Mother of (3) thus began hearing cases. Gambling disputes, Claim disputes, Prostitution and Murder, Morris ruled over every cases regardless. She dispensed justice on 30 Cases during Her Tenure. It ended not as a result of Her performance, but that she was simply voted out in favor of another candidate. Morris would go one to served on many platforms for The Women Suffrage Movement Nationally. Her ''fame'' as the first Woman Justice would carry Nationally. Although passing away at the age of 87 (1902), She was buried with a simple and unadorned Marker (at Her request). However, The State of Wyoming would sculpt a statue of Morris as one of their entrants to The Capital Building in Washington DC's Hall of Statues (which contains 2 such sculptures of famous persons from each State). 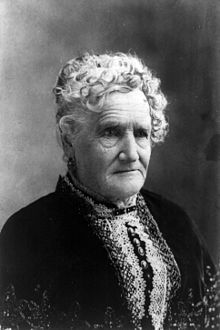