Located in Erdut, Croatia, this fine defensive fortification was built in the mid-14th Century. It served as a defensive outpost to monitor Ottoman-Turk invasions into Croatia. It may have at one time featured a form of defensive perimeter wall system as a primary defensive feature. A central Donjon structure still survives as does a once attached to the Donjon. This would allowed access to and from the keep for defensive and offense. Constructed on a hill overlooking The Danube River, it would have been an impressive sight from the East. First mentioned in documents as early as 1335, it was owned and administered at one tome by a family of nobility (Banffy).

It is unsure if they hired an army or recruited one to defend the fortress against The Ottoman raids of 1552 and 1687. The Castle did receive damage but was repaired to some degree. Erdut suffered heavy damage from The Croatian War for Independence in 1991, when artillery from both sides bombarded the site. Since then, it has been repaired as much as possible, and can still be visited. 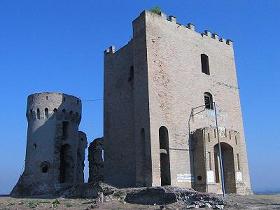