These troops were the "Cavalry Arm" of The Praetorian Guards (similar to a Household Cavalry Guard). They were created during The Imperial Period (between 98-117 A.D.) They were known to have participated in The Dacian Wars (101-106 A.D.) They are "featured" on Trajan's Column.

Commanded by a Praefectus Praetorio (Commandant), who in turn regulated the day to day operations to a Tribune. Their initial strength was around 720 horse, divided into 24 Squadrons (30 troopers each). By the time of Emperor Hardian, these numbers were increased to 1,000. Once again in the reign of Emperor Severus (3rd Century A.D.), they were given a final boost to 2,000. The force was headquartered in Rome.

Recruited from existing cavalry units of proven horsemen in combat, initially, only Roman citizens could be selected. When Provincial Recruits were allowed, citizenship would be granted upon enlistment. Although they carried the standard Roman cavalry equipment (several Hasta Spears and the Spatha Sword) - they carried a much different shield (similar to to infantry Scutum, but much lighter with tapered corners). The forces insignia was The Scorpion. After the defeat of The Guards against Constantine at The Battle of Milvian Bridge in 312 A.D. - they too were disbanded. However, Constantine would base his Guard on their standards and disciplines. 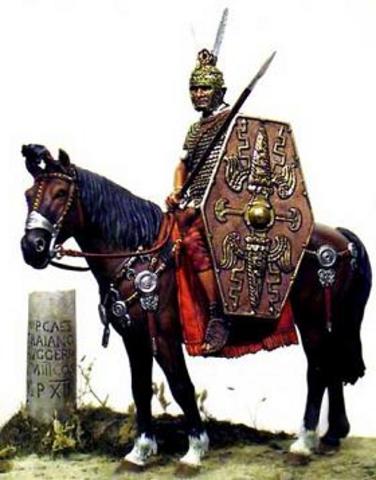