These were mounted Gladiators (Cavalry). Often used in Battle spectacles, they were trained to imitate Roman Cavalry. Normally armed with Spear and Parma Shield (Round), The Eques was allowed head protection in the form of full helmet armor (normally with stylized face armor). They were not traditionally fully armored, but used heavy linen wrap (for arms). Legs were bare (save for footwear). The Eques was often paired with Essedarius Units. They could also “double” with Bestiarii Fighters as well. 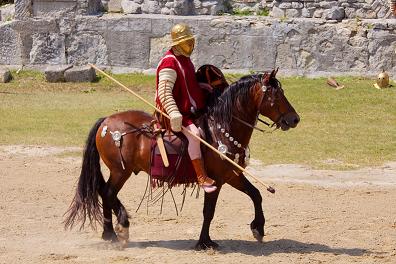