Lasting from 1642 until 1651, The English Civil War was a series of internal struggles of the English Peoples, regarding their continued governance by either The Monarchy or Democratic rule. Forces of The Monarchy of King Charles I  (known as "Cavaliers") fought Parliamentarian Forces (known as "Roundheads") - fought a series of bloody battles. The Monarchy would eventually fall and the establishment of a short lived "Commonwealth" would last but 3 years (with Charles I Son being reinstated).

Both sides used Infantry, early firms of Artillery and Firearms and Cavalry. It was with The Cavalry, that great leaps and bounds were made. In many way, English Civil War Cavalry was the last vestiges of Medieval mounted warfare's "dying throes". Traditionally, "Heavy Cavalry" was used to create gaps in an Enemies battlelines, with "Lighter Cavalry" used to exploit this. The advent of Firearms (such as The Matchlock and Doglock), gave Cavalry the ability to cause more damage are greater distances.

Due to their early design and imperfect powder measurements, velocities of lead shot were varied. Nonetheless, Armor used by early Civil War Cavalry began to become impractical. No longer were the heavy and cumbersome Armor suits safe. Most often that not, a .75 Caliber lead shot could penetrate such, or at least cause severe blunt force trauma (a much slower death, in most cases).

Reinforced Breastplate and Backplate, as well as Buff Coats with armor plates, became the norm. These also increased range of motion,  needed with deploying Firearms from the Saddle. Additionally, enclosed Helmets gave way to the iconic "Lobster-Tail" or "Pot Helmet". As we have seen, these featured a Barred or Meshed Visor that afforded better all around visibility.

Next, the addition of The Doglock Pistol was innovative, in that a Mounted Soldier no longer had to rely on just one shot. He now could fire 2. Still, The Sword was the primary close quarters weapon used (until at least Firearms technology advanced greatly by the 18th Century.

The tactics used in The English Civil War, especially by Parliamentarian Leader and General Oliver Cromwell and his "New Model" Army, would greatly enhance their mounted Force and advance their victory against The Armies of King Charles. So effective in fact, they would remain a constant for The British Military for Centuries. 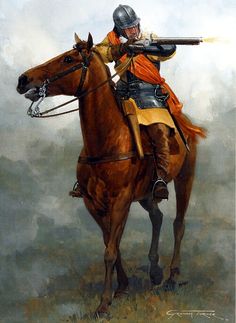