With the advent of gunpowder and early firearms, Armor for use as a protective measure on the battlefield, had waned into almost non-existence. Still, by the 1640s – and the eventual start of the English Civil Wars, it's use was still looked upon as a measure of necessity. Both sides (Parliamentary and Royalist), used basically the same type of personal Armor. Cavalrymen (both Heavy and Light), wore a Gambeson-style Outer Coat. Made of wool and leather (sometimes heavy cloth or canvas), they were designed long at the wait (providing an almost Base Shirt appearance).

The Outer Coat was good at slowing down a saber or sword slash (if nothing else!). Next, both sides used both Cuirass and Breastplate (full and half versions). Strapped into place, they could provide a level of protection from firearms (as distance). Another common practice was the use of a Roman-style “Manica” (single armed armor). Extending from the hand to just below the elbow, it provided some protection to ones “fighting arm”. This was seen mostly with The Cavalry. Finally, the use of the iconic Lobster-Pot Helmet (with rear neck plate extension and face visor-piece), was added.

The Cavalry version did provide much more freedom of movement on the battlefield than 150 years earlier. As for Infantrymen (both Pikemen and Arquebussers), the use of the also iconic Morion Helmet with Breastplate was the common issue. Heavy cloth Gauntlets or even Gambesons could (and were used). 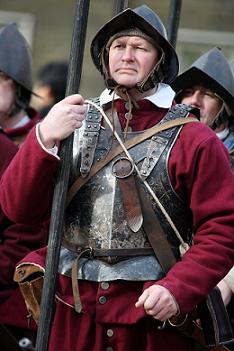