The opposite derisive term to “Roundhead”, a “Cavalier” was a supporter of the Royalist Movement (and Charles I). Favoring supporting and defending The Monarchy from a shift towards “Democracy”, “Cavaliers” represented the Nobility and Titled. Noted for their “fashion sense” - they indulged in long, curly hair and extravagant, showing clothing (as was the trend for Nobility in Europe). The term also was linked to “Dandy” and “High Born Gentleman” (both equally offensive to a Noble). In contrast, Nobility could afford (and often relied heavily) on the use of horses – which was another link to the word “Cavalier”. Still, more – one who was “daring, perhaps to a point of overbearing” could be called the term. All definitions readily described a “Cavalier” (from a Roundhead perspective!). The term would eventually evolve into “Tory”. 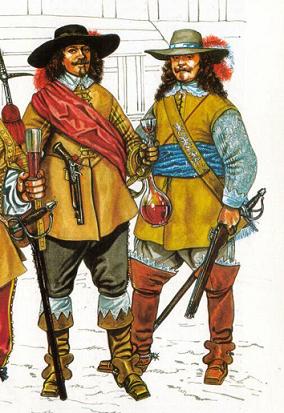